Another day to die hard

On February 5th, 2013 the German press conference for ANOTHER DAY TO DIE HARD was held at the Adlon Hotel. I could asked three questions. This is a transcript of my questions and the answers given by director John Moore and actor Bruce Willis.

Stefanos Tsarouchas: To John Moore. You worked sixth times before with Marco Beltrami. Was it hard to get him on board and can you talk a bit about the music, since only a few notes left from Michael Kamen's original theme?

John Moore: It wasn't difficult. We work together all the time. It's an assumption. Every time I start a project Marco will score the movie and as you rightly said, we took a beautiful motif from Kamen's score to pay tribute. I mean, there are a lot of little touches in this movie, that pay tribute to the wonderful body of the DIE HARD movies and I think, the score is, it's amazing just those four, five notes and people already feel like their watching the very first movie. It was a tremendous score and Michael Kamen gave an interview, where he was asked, what his motivation was: 'It's like a Tom and Jerry cartoon, you know, where the mouse is trapped and the cat is chasing him.' So that's why he had such a wonderful whimsical score. Ironically enough, such a very nasty grilling action, but a very whimsical score and that's John McClane, you know. It's, he's laconic, he's sarcastic and you know, we try to do this with the music and it's a very faithful score to the first movie.

S. Tsarouchas: To John Moore. It takes about 12 hours at least to drive to Chernobyl and a border crossing too. Why don't you show us car chases then, involve Chechen gangsters as surprise guests?

John Moore: Ah, they drove at night time, really quietly! Even the McClanes get a night off. Ah, yeah, you know, I, believe me, there was a moment where, when we started filming, a studio executive said to me: 'Wait, Chernobyl is not in Russia?' and I: 'Ah, it's the Ukraine!', but, you know, we took a little license, yes, I think it's 490 km (It's 974 km according to Google Maps, annotation by S. Tsarouchas), maybe more, but, you know, their in a Maybach by Mercedes (laughter). Those things are really fast, really quiet (laughter). Thank you! Next question! (laughter)

S. Tsarouchas: To Bruce Willis. Many TV series are being remade for the big screen. Is there a chance to see you in MOONLIGHTING - THE MOVIE, I don't know? 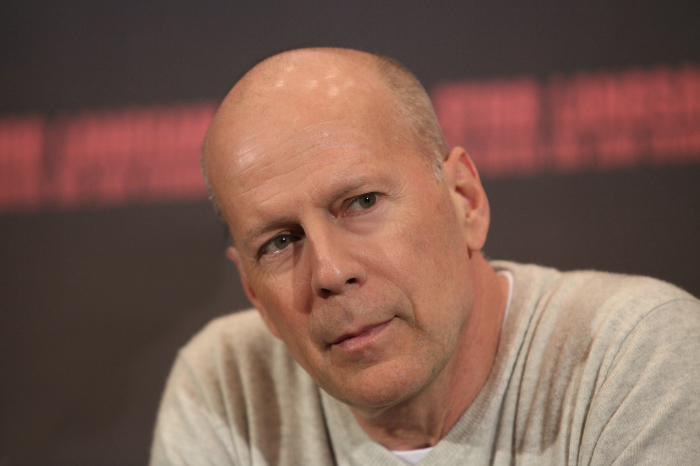 Bruce Willis: MOONLIGHTING - THE MOVIE would be, would be, it's very, it's a very nice idea. I wish you, they just put it back on television and let people see it again. Somehow that TV show got caught ip in not making the syndication loop and it's very difficult to see it these days unless you buy the DVDs. I would like to do a screwball comedy. I would like to do a film like MOONLIGHTING, where, you know, people talk as fast as they possible can, but it doesn't come up! You don't see very many scripts like that. You don't see very many films, that get made like that, but thank you! I liked that show too. It was fun.