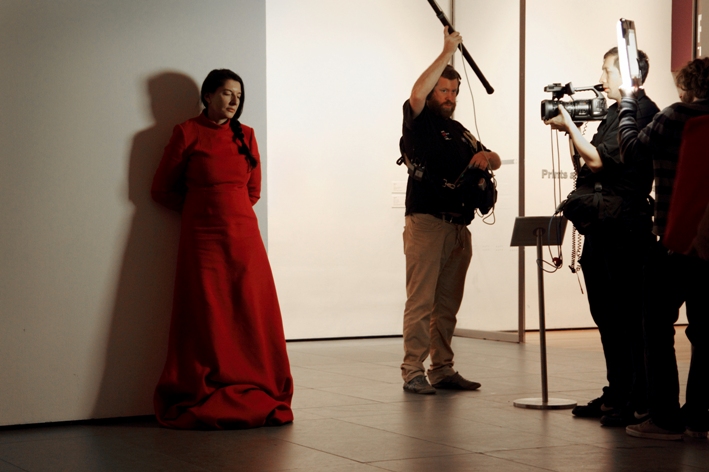 Bettina Hirsch: What's the movie about?

Marina Abramovic: MARINA ABRAMOVIC: THE ARTIST IS PRESENT it's really a portrait of an artist, but not just that: Its about, what it really takes to make performance art. I actually gave completely control to the director Matthew Akers. I gave him the key to my apartment for one entire year. I wearing a microphone with me, always on for one entire year, which is really a vulnerable situation and totally cancels privacy. So he could come in with a crew in the early morning, the camera on my face, waiting till I wake up. In the movie you'll see that nothing is staged. Everything is real and that's why the movie really has the value of a kind of true portrait.

B. Hirsch: What is the influence, your personal influence on the movie? Did you say 'Don't put this on me'?

M. Abramovic: No, no, and there are parts, that look ugly and there parts, where I look good. Parts where I say: “Oh, my God!” Even the parts, where I go sick, vomiting in the bathroom. I didn't say, no to anything. I think, it was very, very important. Because you see, one of the reasons I accept to make this movie was, that I really want the public to understand, what it means to be a performance artist. What it means to, what kind of preparations you have to go to make the piece, this three months in MOMA. Because performance art has always been seen as a kind of alternative form of art. Never really as a mainstream, as with photography, video, because in the beginning of photography ... it was never even considered an art form and then later, much later the photography, video now is an equal art form like paintings, sculpture, everything else, but performance is always kind of an outsider. There are so many times, when I would get invitations for museums or Kunstverein or Kunsthaus, they say: “Oh, you know, we are doing this opening. Can you come and do some performance?” So, performance means something like entertainment! You're doing something in the corner and people having drinks and don't even look at you! Performance is serious business. It is not like that! So this movie is really actually so important! Not, not about my glorification or my work, but more important to reach a large public, who's never been to a museum, who never saw performance, who don't even know, what means performance! And not even seeing it as a form of art. To see that its really a powerful form and if the good performance its there, it could be transformed into an experience.

B. Hirsch: And how does it feel for you to see other actors perform your pieces?

M. Abramovic: I decided to do that for the many reasons, because performance is a time based art and you have to be there in the space seeing it. Otherwise its only that material in the books or a very bad video. I really want performance to be live ... I decided actually, before I've done these live pieces, I decided to reperform first the pieces of some other artist. I made it a work in Guggenheim in 2005, calling it "7 easy pieces", where I perform the pieces from Joseph Beuys, from Valie Export, from Gina Pane and different people, really to show to people, that actually you can re-perform. Because till now performance had been stolen by everybody and I'm fed up with this situation! It had been stolen by MTV, by television, been stolen by fashion, by the design industry, by advertising, by theater, by film. They were just ... looking at performance images and take them out of context and recycle them in many ways. They never give the credits to the artist! Not just me, but just so many other artists and I had fed up with this! I would say, okay, if you're already stealing something or you re-performing it, do it proper way! Ask permission from the artist, who is alife or the foundation, if he is dead! Pay for the rights, and then make you're own version. I think, that even the new version, even with the charisma of the performer himself or changing his thing, is still better than just having something dead. Performance is a live form. It should live as a live form and if you never re-perform, then you know, you will never see it in that way. So I decided to do only the pieces, which doesn't include physical pain and danger, I get permission to do re-perform.

B. Hirsch: There are hardly no celebrities in your movie, except you of course and...

B. Hirsch: … at the end you're going to the vernissage and Alan Rickman is talking to you and at the end you're there with, all these celebrities. I have read about your performance, that Isabella Roselini was there and everybody was there.

B. Hirsch: Lou Reed and everybody sat across the table or across your chair, across you.

B. Hirsch: Lady Gaga, so they were all there.

B: Hirsch: but they are not showing up in your movie. Was it your decision?

M. Abramovic: No, it was just, I think ... because of misleading. Especially HBO, that produced the movie and America is so sick about celebrities. Its everything about celebrities and we decided, I don't know, the director decided, it was not so important and it was much more important that to actually feature the normal public and the reactions of the people and not to put any kind of tension to celebrities, because it could be misleading. In the end you have the party and you know, things are happening, but not

M. Abramovic: In the beginning. I don't know. I sit in the front of 1750 people in this three months and I sit 736 hours and there was, okay a few celebrities, but somehow we put attention to the more normal people.

M. Abramovic: ... I remember Sharon Stone standing, sitting in front of me and I was thinking:

B: Hirsch: Did you recognize her?

M. Abramovic: No, I was looking at her and she's really looking like Sharon Stone, but it can't be her (laughs) and then in the end, we say: “Oh! It was Sharon Stone actually!”

M. Abramovic: I was really amazed. There were also another interesting people like Christiane Amanpour. She came to sit, that was kind of ...

B. Hirsch: But the first one, who sat was Ulay?

B. Hirsch: Did you know that?

B. Hirsch: And that's what you told me.

M. Abramovic: Yes, he's here for the premiere and I'm very, very happy. He's not well, you know and I'm very worried about him, but he's, we done all the interviews together yesterday.

M. Abramovic: And for me, it was extremely emotional, because I had very strict rules. You can't touch the table. Yu can't do anything. You are just have to there engage with me with the gaze ...

B. Hirsch: But you did this

M. Abramovic: ... but, I spent half my life with this man, so this was so emotional.

B. Hirsch: But did you know, that he would start the show?

B. Hirsch: You didn't know. You looked up and this was him!

M. Abramovic: I knew, he was there. I didn't even know, that he would even come to sit with me. I didn't know. I was thinking, he will not, you know, I knew, he will come to the opening. It was really an incredible shock.

B. Hirsch: It's your performance

M. Abramovic: And by the way, this movie, I can't look at it without crying. I completely not have any objectivity, because its too, too close to me. Its like tonight, you know, I will go for the question/answers session, but I will be sitting outside. I can't look at the movie.

M. Abramovic: It's so hard! One day maybe, when I get older, I don't know