Stephanie Leonidas (as Jenne in "Crusade in Jeans") 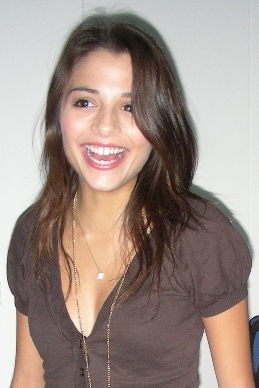 Stefanos Tsarouchas: Can You tell me a little bit about yourself?

Stephanie Leonidas: Yeah. I'm 23. It's my birthday next week. Well, no, I'm 23 next week, sorry. I'm used to saying 23 now. I just finished doing “Crusade in Jeans” and today is the first time I saw it all the way through, which was really interesting. And, yes, so here I am at THE CRUSADE IN JEANS party.

S. Tsarouchas: You look much younger in person than in the film!

S. Leonidas: You think, I look younger now? Really!? Okay, yeah, I mean, I've obviously played a 15 year old, so I'm used to kind of playing young girls. Yeah, and I still get questions to go even to see 18-Films! So, I'm one of those people, who has to take the ID everywhere. I'm sure one day, I appreciate it.

S. Tsarouchas: How did you got the part?

S. Leonidas: I had several auditions with Ben Sombogaart. We met a few times in London. We did workshops with other children and basically I read the script and really, really loved it and wanted it. And so just hoped I would get it. And I was lucky enough to get it and work with Ben.

S. Tsarouchas: What kind of workshops?

S. Leonidas: We basically did a couple of the scenes to see, how we bonded together and how we fitted character wise. It was really nice and I met some of the children in those workshops. A lot of us met already from the auditions,

S. Tsarouchas: Where you the first one to be casted?

S. Leonidas: I'm not sure. I knew quit early on, when I got it, but I had to wait about a year until it actually got shot. We were meant to start filming in January and then February and it kept going. We didn't end up filming till almost August. So it was a long way. The auditioning process started a year before that. So it was a long, long process.

S. Tsarouchas: Where was it filmed?

S. Leonidas: Mainly Germany, different parts of Germany. Then we were in Luxembourg and Croatia. So we travelled quite a bit. It was a crusade for us all. It almost became real, because in the end we're just trekking through these forests to get to the next locations. We were out in every sort of weather and different countries . It was really lovely actually, because we got on so well and so it was like a big holiday almost. It was good fun. It was tough, but it was good fun.

S. Tsarouchas: Did you read the book?

S. Leonidas: Yes, I read it, while we were filming. I didn't read it thoroughly, but I was flicking through bits. My manager Joe read it. Jenna isn't in the book obviously. It's a character, that was put it afterwards and so it's not complete to the book, but hopefully people won't be too disappointed.

S. Tsarouchas: The end screams for a sequel!

S. Leonidas: Who knows? I mean, you have to ask Ben that. I have no idea.

S. Leonidas: Definitely, I'm not so sure that there will be one, but who knows.

S. Tsarouchas: What can you say about Jenna?

S: Leonidas: Mainly just, to be honest, because she is a 15 year old girl, you have to remember at the end of the day. She's 15, just like any other 15 old. So, even though she's growing up in the middle ages, she goes through the same emotions as a 15 year old would. She falls for Dove. She takes care after these children. It's kind of important, I think to remember that she's still a child and so I basically just took from when I was 15. I studied a lot of the middle ages, the crusade and the history lessons at school, so I knew a bit about all of that anyway. Yeah, I guess, it was just as we went along, learn more and more and even just being in different locations I think, helped a lot

S. Tsarouchas: Could you chance something, where you thought it doesn't fit?

S. Leonidas: Yeah, Ben was quite in the way, that he let us just kind of get on with things. We were on set, and obviously we had lines to say, and we had to say those lines, but it wasn't so strict that you had to stand in certain places. You could move about and feel free with your lines. So, I think that really helped, because it felt a lot more natural and that input was equally listen too and Ben was great to work with. So, it was a really lovely shoot.

S. Tsarouchas: How did you got into the film business?

S. Tsarouchas: Your sibblings are in the business too.

S. Leonidas: (laughs) Ah, you know. My little sister and my brother are both actors. I've got one sister at university. She's like the sensible one. She's training to be a teacher, so, yeah, it is nice. Even my sister, who's at Uni, she loves film. She loves to watch it. She's our critic and when we go out there and try to do our job, she criticises us, which is great. I think it is nice, because we understand each other and have the same passion, so it makes it easier at home, anyway.

S. Tsarouchas: Did you study something, do you have a profession?

S. Leonidas: I'm afraid, I don't have a real job though. (laughs) I didn't study properly as such. I didn't go to Drama School. I think, it was just something that seem to happen for me. I joined an agency, again, when I was 17 and lucky enough, touch wood, I've been in jobs ever since. So, it's just kind of something, that I learned as I went along and picked up different things on each job, because it's been good in a way, because I was kind of thrown in at the deep end and just learned the trade so to speak as I did it.

S. Tsarouchas: When you watched yourself on the screen now, whould you have changed something now?

S. Leonidas: To be honest I look at my self on the screen and I ... hat every moment of it, but there are always things I would change. I mean definitely, there is stuff, I could pick apart until, you know ...

S. Leonidas: Oh god, no! Don't get me started! (laughs) I think, it's always different, when you look back on things and you grow older and you see things in a different way anyway, I think, I'm always gonna criticise it. It will never be perfect in my eyes.

S. Tsarouchas: You're Father is from Cyprus, can you say something in Greek?

S. Tsarouchas: I've a friend in Cyprus, and he told me, they love you there! Can you say something more?

S. Tsarouchas: It's a bit early for that!

S. Leonidas: It's almost past my bedtime (laughs) so, I'm aloud to say that!

S. Tsarouchas: Have you seen the fan page site you have?

S. Leonidas: Yes, I have seen it. It's lovely, I think. I met the guy, who did the fan page. We met on “The Crusade” Q&A then. Yeah, I'm really flattered that someone would do something like that for me and I would never know how to make Websites like that, so, please (laughs) carry on, thank you!

S. Tsarouchas: You have your birthday next week. Let's say 10 years from now, or when you 35, where you want to be then?

S. Leonidas: Okay, well, I want to be still doing, what I love and playing good characters, different characters as well. Just being really versatile with my work and enjoying it, which is the main thing for me and as long as I'm still enjoying it and I'm still happy then, that's all I wish for.

S. Tsarouchas: You worked for Television and movies. What's the difference?

S. Leonidas: TV is hugely different from working in film apart from the fact that you have less time to do everything, depending on what TV job it is. Sometimes you have 4 weeks, sometimes you could have a couple of months, then it's more like film in a way of time. But, yea, it's quicker. You obviously don't have big locations, lots of it is done in studio or stuck to one location, but I like both equally as much and I love theatre as well, that's something else I want to do more off.

S. Tsarouchas: You also did theatre?

S. Leonidas: Yeah, I did my first play 2 years ago, The Royal Court in London. It was amazing actually. I really, really enjoyed it. Again, I was thrown in, and it was only 4 of us. And it was quite an experience and definitely one, I would like to do again.

Interview with Stephanie Leonidas by Stefanos Tsarouchas is licensed under a Creative Commons Attribution-NonCommercial-ShareAlike 3.0 Unported License.
Based on a work at www.filmmusic.gr.
Permissions beyond the scope of this license may be available at http://www.filmmusic.gr.