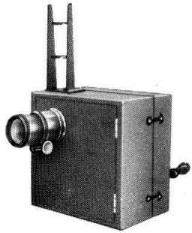 Cinématographe is a movie and soundtrack show on Berlin's local radio 88vier. The regular staff:

For a show about movies and soundtracks you need to hear the music composed for the movie, not just some songs placed in the movie.

In Berlin and Brandenburg you can listen to us at Alex Berlin on FM 91,0 MHz or as an internet stream at Ohrsicht Radio every other Tuesday at 10 CET..