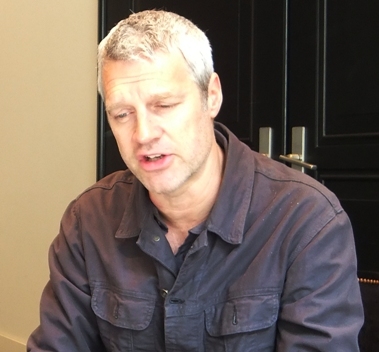 S. Tsarouchas: Why don't you work with the same composer twice?

Neil Burger: Well, I think all my movies are very different from each other and because of that, their different stories, they demand a different style, a different vision and different visuals to serve that story. So I often tailor the crew to that vision, whether it will be the director of photography or the production designer or the composer. It depends. For THE ILLUSIONIST Philip Glass was the perfect guy to write this symphony for it, that still had sort of a mystical or haunting quality. For LIMITLESS it was a completely different sort of electronic score, also kind of haunting actually in a way. I just heard some parts of it recently. I was actually going to work with Paul Leonard-Morgan on DIVERGENT again, but this was a big epic adventure. The studio saw it as this Blockbuster and I guess, so did I, but I also saw it as a very intimate story. The idea of having Hans Zimmer work on it, obviously Hans has done all these big franchise movies like Batman, Superman and so on and I thought, that it was very exciting to work with him. I was interested in exploring, what that would be like to work with him.

S. Tsarouchas: But isn't it also kind of a problem, since Remote Control Productions does almost everything in Hollywood and most music for Blockbusters nowadays sounds exchangeable?

N. Burger: If you think like, who I use to be the cameraman. The director of photography was not somebody that has done these big movies like that. It was somebody, who actually had a very intimate way of lighting a person and that was interesting to me. Look, Hans, he's an incredible talented guy. He has done all these movies, but there is a reason, why he's so sought after, that he's talented. He also did 12 YEARS A SLAVE, which is a completely different movie.

N. Burger: I haven't. Does it feel the same?

S. Tsarouchas: For me it does for the action scenes. It's also from Junkie XL

N. Burger: That's right, Junkie did 300: RISE OF AN EMPIRE. I've heard the music, but didn't see the movie. Yes, but on the other hand we also have, what is also very important, a lot of the music, that's scoring its song, that we used from Ellie Goulding obviously, but also from people like Woodkid or Skrillex or Gesaffelstein. That was an interesting idea. I was looking for something that had a very kind of tribal feel, because the society was almost tribal, but not ethnic and it had a very kind of percussive, I don't know, something that felt sort of mysterious and dark. I think actually, we almost got that more with the songs. Not necessarily Ellie, because that was sort of the voice of Tris, but with people like Woodkid or ASAP Rocky or something like that.