Annemarie Jacir ("When I Saw You")

The following is an edited version of an interview with Annemarie Jacir, the director of WHEN I SAW YOU, conducted in Berlin on February 8th, 2013 for Cinématographe.

The official site of the film WHEN I SAW YOU is here. 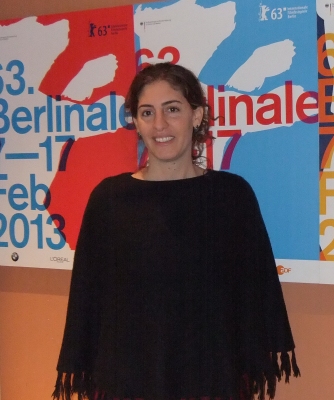 Bettina Hirsch: Hello, Miss Jacir! You have the film WHEN I SAW YOU at the Forum section of the Berlinale. What is your film about? Please tell our audience the plot in your own words!

Annemarie Jacir: Okay, thank you! WHEN I SAW YOU is set in 1967. It's about a Palestinian mother and son, who've just become refugees and they arrive in Jordan. They've been split up from the father in the sort of chaos of war. (…) They find themselves in a refugee camp sort of in the middle of nowhere in Jordan. (…) The boy, he hates the camp. He hates public toilets. He hates food lines. He does … nothing about it, makes sense to him and most of all the whole concept of borders. Why are they in this place? They walked here. Why can't they just walk back home? How do you explain to a child, now there is a border there? You can't. This doesn't make sense to the child. It shouldn't make sense to anybody, but doesn't make sense to him and mostly they lost the father. He doesn't understand. The mother had their names registered and so they just have to wait for the father to come here. He doesn't buy it. He doesn't. How does the father gonna find us here? We don't even know, where we are! (…) He is an 11 year old boy. He is very logical. He is a little bit different from the other kids. He has trouble fitting in, but … he has his logic. When you get split up from somebody, you return to the place you both know. That's how you find each other. So he becomes obsessed with trying to get back home and to reunite his parents. (…) He decides it. He is between boyhood and manhood. His mother is a little bit overbearing and he is also trying to be independent. The late 60's are a time of independence all over the world, but also between a boy and his mother, where he is trying to be independent from her. So he runs away to find the father and reunite them. Along the way he meets a group of Palestinian resistance fighters, who are hiding in a forest and he … politically he doesn't understand at all, what they're doing. He just thinks, he met people like him. They're trying to go back. He is trying to go back. He thinks, he has sort of met people, who opposite to the people in the refugee camp, who are just waiting. He's met people, who are about action.

B. Hirsch: Why the point of view from a boy?

A. Jacir: I like his hopefulness. I mean, I chose to set it at a time, I didn't live, which is the late sixties, but there was a kind of hopefulness during that time period. Hope was everywhere in the world. It was the student movements and anti colonialism movements, woman’s movement, civil rights. Everywhere in the world there was a hope, that regular people can change their lives and I liked the idea of a boy, a little boy also having that hope, because it's a lot about his relationship with his mother and she's lost that hope. She has lost everything. She has lost her husband. She has lost her homeland. The only thing she has left is this boys. So she's a little bit overprotective and she is trying to do things the right way. She is also a single woman in that time period, with a boy in a refugee camp. So she's become a bit closed and we also can take from children. Children take from adults. We're also. So it's a lot about her from changing, because coming back to the point, where he is. He is still innocent. He is still opened. It's not about his political understanding of … it's about his very basic emotional feelings.

B. Hirsch: Did you think about applying for the Generation section?

A. Jacir: Yes, it's funny that you mention this. One of our distributors had mentioned it also. That is a good film for that section as well … So, I don't know … but we went to Forum (laughs) Happy in Forum!

B. Hirsch: So, you are an independent film maker and screen writer living in Jordan. Until the age of 16 you lived in Saudi Arabia, then moved to Bethlehem and Riad. Does the film reveal personal experiences?

A. Jacir: Yes, I think so. In many ways it does, which is … being in exile, dreaming about a place, but also of being separated. I had my own experiences with being … I was living in Ramallah for many years and then I was not allowed to return. That's why I'm in Jordan until today and so I found myself a little bit like the boy in the film. (…) You can see your homeland. Really can see it! I mean, it's not something far away. You see it right in front of you! The place you're not allowed to go, because somebody … this whole concept, somebody says, now this is a border here, that didn't exist before. ... So this whole sort of stupidity here, that … in that way it's personal to me. I'm totally against separation of people from each other.

B. Hirsch: So the story is set in Jordan 1967. Refugees from Palestine cross the border to Jordan. Does the audience need a profound knowledge about Israel's history, Palestine's history?

A. Jacir: No. (…) I don't think so at all. That's one thing in the film also, when you asked, why is it from a little boy's point of view. Also part of the story is that, if you know what is happening in that time period historically, you would have an understanding of the film, maybe different, but if you don't know anything at all, (…) it's irrelevant. I mean, the film is in that way, I think, it's very simple, (…) the mother and the son and I don't think, you have to have any kind of background to understand and to appreciate the story, because it's an emotional story. It's not a documentary. It's a simple human story.

B. Hirsch: The music reveals the new spirit of the 60's. How important is this for you in the film?

A. Jacir: It's … important. I mean, it's important, because for us as Palestinians, we're also in … like I said, there was politically something happening all over the world and socially, but there were also many things happening in fashion and music and as Palestinians we were much less isolated, maybe less than today. I mean, people were influenced by each other and then was music. I was doing all this research, when I was looking for the music of the film. Crazy stuff! Crazy fusion! Crazy people were (…) of course they were taking a lot of drugs to, but (laughs) they were like looking East, looking West. They were, I think, that today we have fusion music. It's very like Hip, but what was happening then was the very beginning of that and it's really interesting, that sort of cross cultural things, that were happening in terms of music and fashion. I found some really strange (…) Egyptian Jazz, (…) great music. It was fun and I think, it indicates a lot about the time period, but also how people were thinking. They weren't thinking in a way we are today. (...) I made it clear, I didn't live in that period and I have my fantasy about that period, but I believe people were more connected to each other then today.

B. Hirsch: Did you asked your parents about this time?

A. Jacir: Yes, I asked my parents. I asked a lot of people. I mean, I did a lot of research and a lot of interviews with people, that were involved in many different things …Yes, I like research (laughs).

A. Jacir: Yes. (…) I've been working with him on all my films, Kamran Rastegar, the last 12 years. So we have a sort of understanding of how the other works, but very early on we started to collect the music for the film. When I was in the script writing phase. I mean, the whole … process till the release of the film has been three and a half year, four fears. So from the beginning we were searching for these tracks and there is also original music. It's a mix of the song, the soundtrack in the film and original music in the film and then there is music, that is performed in the film, that actors perform.

B. Hirsch: What is your next project?

A. Jacir: (laughs) I'm working. I'm in development on a new film, but it's still to early to talk about it (laughs)