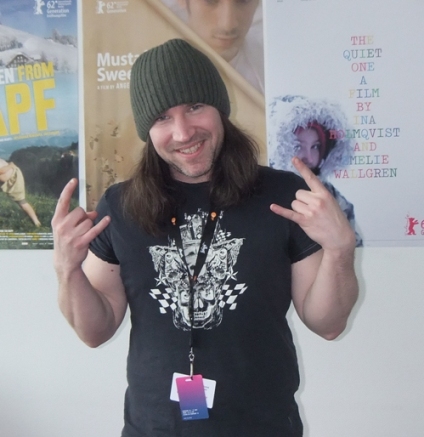 Stefanos Tsarouchas: For me your film was one of the best, regarding sound design and the use of music. (M. Högdahl: Yes.) Why is this so important to you? You could have gone for a more European style, where you have less music or none at all.

Martin Högdahl: Yes. The music has always been important. I knew, that when we were writing the film and it just ... I think, that I wanted music to relate to the characters. So you just doesn't put something on. The heavy metal is in the character. His father is a heavy metal drummer and that is his connection to his father, its the music. The thing, that brings them together, the love for metal and for me its always ... I like metal and I think, its symbolizes many things that I like, that have the same connection in the film. It has a lot of symbols, a lot of powerful symbols and for me Heavy Metal is a symbol of strength and ... community, yes, bringing people together. For me its a very positive

S. Tsarouchas: and the sound design?

M. Högdahl: The sound design ... a production company called CloudBerry Sound made it and ... I just want it to be very live …. I really wanted an adventure feeling, bigger then life kind of feeling to it and the hip hop thing also and that metal also comes from the blues. It comes from the slaves, they started the blues in America to cope with life and I think, it has a good message, just as the film has. Its about rebellion. Its about ... yes, its about taking back your power and your dignity.

S. Tsarouchas: Who suggested the two composers for the score?

M. Högdahl: The thing was, I wanted a guy called Jesper Strömblad, who played guitar in (the group) In Flames, a Swedish Metal Band, but he's not there anymore. I wanted him, but ... he hasn't done any score before. So I brought in another guy for the score and then I had actually a third guy, who was Jesper's friend. So we had three composers making different things. All the music in the film is made for the film. There is nothing taking in from the outside. Everything is composed for the film. So they did a really good job.

S. Tsarouchas: Did you use temp tracks?

M. Högdahl: Yes, we had temp music, when we were editing, but actually we had a Guns'n Roses song (laughs), but we couldn't get that one (laughs), so, no, the music we have, is better than Guns'n Roses (laughs).

S. Tsarouchas: Who came up with the idea to use the music in a kind of comedy way.

M. Högdahl: Its my editor and of course Niklas Skarp, who is the sound designer. They had a great influence on it and I just said, let's go for it. This is a film were you can do that. You can really max it out. They did (laughs) Also the sound effects and everything is just to lighten things up and just bring a larger than life feeling to it. I wanted it to be a kind of modern fairy tale with a message. So, yes ...so the story allowed it to be like that.

S. Tsarouchas: You directed short films. I think, you were also a camera man, you did production (M. Högdahl: Yes) You did all that. Is it helpful for you, for your first feature film?

M. Högdahl: Yes. Of course everything is important to just keep on filming and this was my first film. So it was, I had a lot of good people with me on this one.

S. Tsarouchas: You also write your own scripts. Why didn't you for this one?

M. Högdahl: No, because I just, its based on a book and I just wanted someone coming in with fresh eyes and someone that's better than me (laughs). We found Petra Revenue, she is fantastic and she has, and yes, she has a good eye, really.

S. Tsarouchas: What did the writer of the book thinks about this film?

M. Högdahl: He hasn't seen anything actually (laughs). So he's going to see it in Stockholm next week (laughs).

Bettina Hirsch: So this is the premiere here for the film?

M. Högdahl: Yes, but I'd showed it in Gothenburg.

M. Högdahl: In Göteborg, Göteborg! In Sweden, yes, we showed it there, but that's the only time. This is ... kind of a premiere actually.

S. Tsarouchas: Is the story in the film different from the book?

M. Högdahl: The book is longer. It has 5 acts, if one can say that. We have a four act film, and that was kind of highlights. It was also summer and winter. We just took the timetable, just push it and just made it into a winter film. In the book its summer and its, yes, it has a longer time line. And just with the foster family and everything we just shrunk it (laughs) Can you say that? (laughs) Shrunk it! Yes, and some things we added like the Metal music thing.

B. Hirsch: Ah, you added this one.

S. Tsarouchas. What was the father in the original book?

M. Högdahl: In the original he was just drunk actually ... and the girl also was a Swedish girl. I wanted to give (B. Hirsch: the Asian girl) Yes, I wanted to give her flavor. We have a big Thai community up in the North of Sweden and I thought , that would give the film more flavor and versatility and more life (B. Hirsch: Great Idea.) Yes and I wanted the film to be, to feel like its in the 1950s, because its a genre, that I really like and it made a lot of good films I like, like "My life as a dog"., Its a Swedish film, same kind of themes and there are other films like that. "Stand by me" is a really good film, but "Stand by me" is much more nostalgic and "My life as a dog" too and because I think its a serious subjects and I think its something, that is important now and I wanted to have nostalgia, because

B. Hirsch: How old is the book? When was the book published?

S. Tsarouchas: I read in a Swedish blog, that you had a difficult childhood too. . Is it true?

S. Tsarouchas: Were you stealing or something like that?

M. Högdahl: No, not, really like Mick, but I did some thing, that I can relate too, really, absolutely.

S. Tsarouchas: You produced an 8 minute teaser (M. Högdahl: Mhm.) for financing the film. Was it so hard?

M. Högdahl: Yes, we really needed to do that. We made a pilot, like a 10 minute, 8 minute pilot, because its tough to get money, especially for this kind of film. Its quite expensive for a children's film in Sweden. Its like 2 million euros and that's absolute max you're going to get, if you're not going outside to get money outside Sweden, out in Europe and its my feature film debute, so, that was (laughs) the maximum, but ... we made this pilot and made a lot of other things and animation too, we made, so ...

S. Tsarouchas: Is it the usual way now in Sweden to get money for a film? Not just pitching the script?

S. Tsarouchas: Not, any more.

M. Högdahl: You can't do that anymore. Before you could just leave them the script. They don't make as many films anymore in Sweden, like 10 years ago. We made like 40 films, and now we make like 25 and that means a lot less children's films too.

S. Tsarouchas: But now with the success of Swedish films, like "Girl with the Dragon Tattoo" and "Let the right one", I thought that situation has changed!?

M. Högdahl: No! Our politicians don't think that film is important ... We have less money, than the Norwegians have. They have double the budget and they have half of the population (laughs), but they have oil too.

B. Hirsch: But we don't have a Norwegian children's film in Generation this year. We had one last year.

B. Hirsch: So how come that you wanted to do a children's movie?

M. Högdahl: I worked with children before, but it was just a very good story.

M. Högdahl: I don't really know. Its kind of like the film maybe. Its like 9 to 13 kind of. Its just that, as I think, it hasn't been done in quite a while, films for children that age. The most things for smaller children or adults and yes, I really wanted to do something in this age category, because I think ... when you're at that age, you have so much life and you still have so much fantasy, just before you go into puberty and you become so self aware about yourself and everything, and its just so much life in that age and .. yes, I really like it and its just the fantasy thing.

B. Hirsch: You said, that in Sweden the film is supposed to be for children 11 and older ...

B. Hirsch: And why is it censored?

M. Högdahl: They put an 11 year and older rating.

M. Högdahl: Because it was to scary for smaller children, but if you're seven, you can go and see it with your parents, but under seven, they thought it was too ... we tried to ... (laughs) to make it from seven, but they ...

M. Högdahl: Yes, it was a lot of things. They had a list (laughs). It was the Horror film on the TV and it was just the whole situation and ... something about pointing guns, and he's under the water, under the ice, it is like, okay, well (laughs)

S. Tsarouchas: As adults we were a little bit unsatisfied with the end, because we don't know what happened to the father and to the brother. Are they're coming back? (M. Högdahl: Yes) Was there a different ending or how is it in the book?

M. Högdahl: No. The book ends actually there too. So you never know, what happens to his father. Actually in the book its much grimmer, because the father is really out ... we put in that Mick says: "Can my dad live here too?" and his aunt says: "Yes, when he gets well!" and his brother also says: "I will be back!" and I believe him (laughs). Yes, its a happy ending.

M. Högdahl: Yes, but I think this length is perfect. Its a very good length for a children's film and just ..the pace of it, and ... what we edited, maybe I missed one thing, but I think, we have it all.